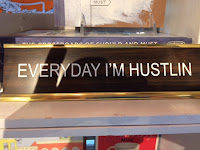 Another name for an encore hustle is a second act career.  So what happens when you pursue a third act career?  Read this article about Too Yong Chuan from Singapore who joined the Singapore Straits Times as a correspondent in. 2011 after 18 years as a civil servant.  After surviving several reorganizations at the Straits Times he made the decision in 2017 to enroll in law school as a part-time student.

To prepare for the four year commitment he paid off his mortgage and enlisted the support of his wife and children.  While he is the oldest student in his class he feels that his life experience gives him an advantage over his much younger cohort.  He also hopes that this will provide him an advantage when he applies for a law clerking position in two years.

I somehow have the feeling that Mr. Chuan will not settle for just a third act when it comes to career reinvention.